* The group of the Joint Custody
http://kyoudousinkenhubo.cocolo-nifty.com/

WASHINGTON, D.C. – The case of an American father who has been arrested in Japan for attempting to regain access to his children, taken to Japan by his ex-wife in violation of a U.S. court order, is helping to raise awareness of the increasing problem of international parental child abduction and the heartbreak and frustration suffered by the parents left behind.

Christopher Savoie of Tennessee was arrested earlier this week in Japan after he attempted to reclaim his two children who were taken to Japan by his ex-wife a month ago in direct violation of a U.S. court order. Savoie was taken into custody and is facing criminal charges.

Historically, parents left behind when their children are abducted to Japan have little hope and little recourse for justice because the Japanese government ignores U.S. family court rulings and will not honor the rights of American parents.  Even in “extreme cases” such as when the abducting parent passes away, the Japanese government has not returned the child to the left behind parent. In fact, there is no known case of Japan ever returning an abducted  Japanese-American child to the left behind parent.

“There is an opportunity here to turn a new page,” Smith said. “There is a glimmer of hope, and some encouraging signs that the new administration under the leadership of Prime Minister Yukio Hatoyama will approach the issue of international parental child abduction in a way that recognizes the right of the adult parent.  The case of Chris Savoie sheds light on the more than 100 open cases  of American parents who have been blocked from their rightful access to their children in Japan.

“I urge the Prime Minister to see this incident as a catalyst,” Smith said. He should form a task force and deal expeditiously, compassionately and judiciously to bring reconciliation and reunification to children abducted to Japan and their parents left behind.”

Smith has been working to push the U.S. Congress and the Obama Administration to better address international child abductions in Japan and elsewhere around the world. In July, he introduced the “International Child Abduction Prevention Act of 2009”, H.R. 3240, at a press conference alongside left behind parents from across the country whose children have been abducted to Japan and Brazil (bill summary). One case has garnered significant attention: David Goldman the father of abducted American-born Sean Goldman, now 9, has been fighting to bring Sean home from Brazil for more than five years. There are currently over 2,800 American children being held in foreign countries against the wishes of a left behind parent.

“My legislation, HR 3240 empowers the United States to more aggressively pursue the resolution of abduction cases,” Smith said.  “Our current system is not providing justice for left behind parents or for children whisked away from their mom or dad. Congress must act so that more children are not further traumatized by parental abduction.”

Key provisions of the Smith legislation include:

“Child abduction is child abuse,” Smith said. “The kidnapped child is at risk for serious emotional and psychological problems. As adults, they may struggle with identity issues, their own personal relationships and parenting.

“We can and must do better to help children abducted by a parent and to assist the parents left behind.”

TOKYO, Japan (CNN) — The case of a Tennessee man jailed in Japan for trying to snatch back his children from his estranged wife is not as clear-cut as it’s been made out to be, authorities here said Wednesday. 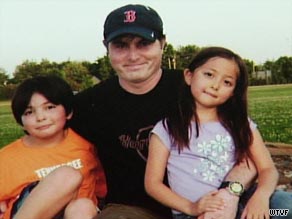 And while he and Noriko Savoie, a Japanese native, divorced in Tennessee, the two never annulled their marriage in Japan, Japanese officials said.

Also, the two children at the center of the case hold Japanese passports, they said.

« His chances of getting his children back home to the States, I think, are pretty slim right now, » Jeremy Morley, Savoie’s lawyer in the United States, told CNN’s « AC 360 » on Tuesday night.

« We’re getting this in the hands of Interpol. We’re putting the pressure, » he added. « We want diplomatic pressure. We want the United States government to act strongly. » Read about why the case is not news in Japan

Savoie was arrested Monday when he snatched his two children — 8-year-old Isaac and 6-year-old Rebecca — as Noriko Savoie was walking them to school in Fukuoka, about 680 miles (1,100 kilometers) southwest of the capital, Tokyo.

He headed for the U.S. consulate in that city to try to obtain passports for them, authorities said. But Japanese police, alerted by Noriko Savoie, arrested him.

U.S. State Department spokesman P.J. Crowley said Wednesday, « We have paid a consular visit on Mr. Savoie and we stand ready to help him in any way that we can. »

« Obviously, this is a very difficult issue, » he said. « … The United States and Japan have an important partnership but on this particular issue, the issue of … abduction, we have different points of view. »

Japanese authorities said Wednesday that Savoie was eating well and was staying in a jail cell by himself.

He will be held for 10 days while prosecutors sort out the details of the case.

« I know he had to go to the hospital for blood pressure issues, » said Amy Savoie, whom Savoie married after divorcing Noriko Savoie in Tennessee in January. « The gentleman from the consulate was able to contact me this morning, and he confirmed that Christopher had gone to the hospital. The first night he needed medication for his high blood pressure. »

After their Tennessee divorce, Noriko Savoie agreed to live in Franklin, Tennessee, to be close to the children, taking them to Japan for summer vacations.

In March, Savoie requested a restraining order to prevent her from taking the children to Japan, fearing she would not return.

« I was on a speaker phone telephone call once when she proclaimed to him, ‘You have no idea what I’m capable of, » said Amy Savoie. « So, yes, he had the idea. »

On the day that the two children were to begin school in August, Savoie learned Noriko Savoie had fled with them to Japan.

After that, Savoie filed for and was granted full custody of the children by a Tennessee court. And Franklin police issued an arrest warrant for Noriko Savoie.

But Japan is not a party to a 1980 Hague Convention on international child abduction.

« We continue to encourage Japan to join with our countries and sign the Hague Convention, » Crowley said Wednesday.

« She has committed a felony, the mother, » Morley said. « It’s a very serious felony. She would go to jail for serious time if she were here.

So, Savoie flew to Fukuoka to try to get back his children — and landed himself in jail.